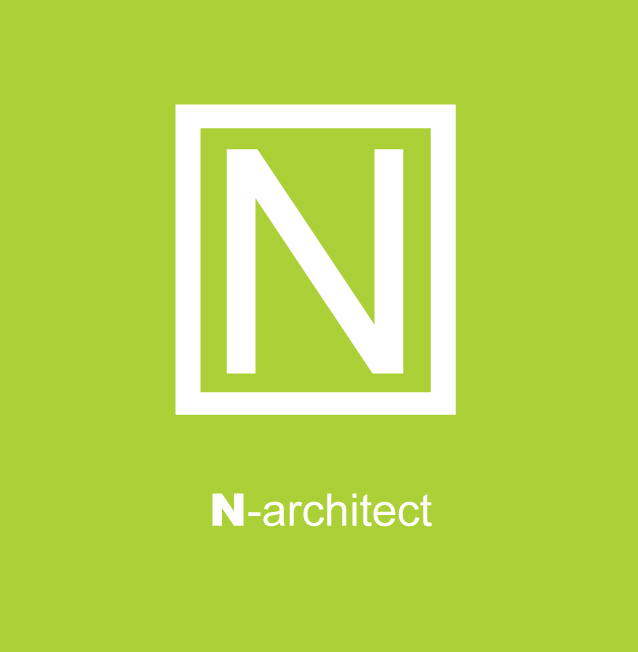 Paris is often considered the most beautiful city in the world. This is mostly due to its wonderful architecture heritage, giving Paris to be described as a “museum-city”. This project sits in the very heart of Paris, surrounded by some of the most renowned jewels of its history : Louvre, Pont des Arts, Pont-Neuf, to only mention a few …

Instead of trying to add yet another monument to this impressive collection, and compete with the existing cityscape, the main concept of this project is to fade into the surroundings and stay as humble as it can. To do so, the simple geometry of the proposal is wrapped with highly reflective metal panels, in order to reflect the monuments all around.

Each volume of the project has been carefully thought to “frame” reflexions of the most picturesque views of the existing marvels, visible from ideal spots such as the Pont des Arts, the opposite Seine river bank or even from the famous “bateaux-mouches” cruising day and night along the Seine.

From inside the project, other framings have been created … direct point of view of the same monuments but with new vision, and totally different and prime atmosphere.

Also, the skin of the project isn’t made of flat surfaces, it is fragmented to give a contemporary and fresh approach for the reflexions of this very well-known heritage cityscape.

Champagne is one of France most prestigious production. Being located in one of Paris most unique place, this champagne bar already has in itself, and around it, all the excellence it could have. Therefore the project was really thought as an architecture, a humble piece of urban landscape, rather than an architectural object in itself. The hyper-contextuality of the proposal is the key to its durability and flexibility, as it may house other programs someday. Also the construction approach leans towards that idea too, with a timber structure, prefabricated and dismountable , delivered and implemented by boat, for a minimal site impact.

The roof of the project have been treated as a public space, giving once again splendid views of Paris’ finest architecture. These elevated terraces are accessible directly from street level, and also from the river bank through wide public steps linking both levels.

At night, the project truly merged into Paris iconic “berge”, and glows at the same time, generating an almost surrealistic game of lights and reflexions … like in some of Magritte’s most famous paintings. 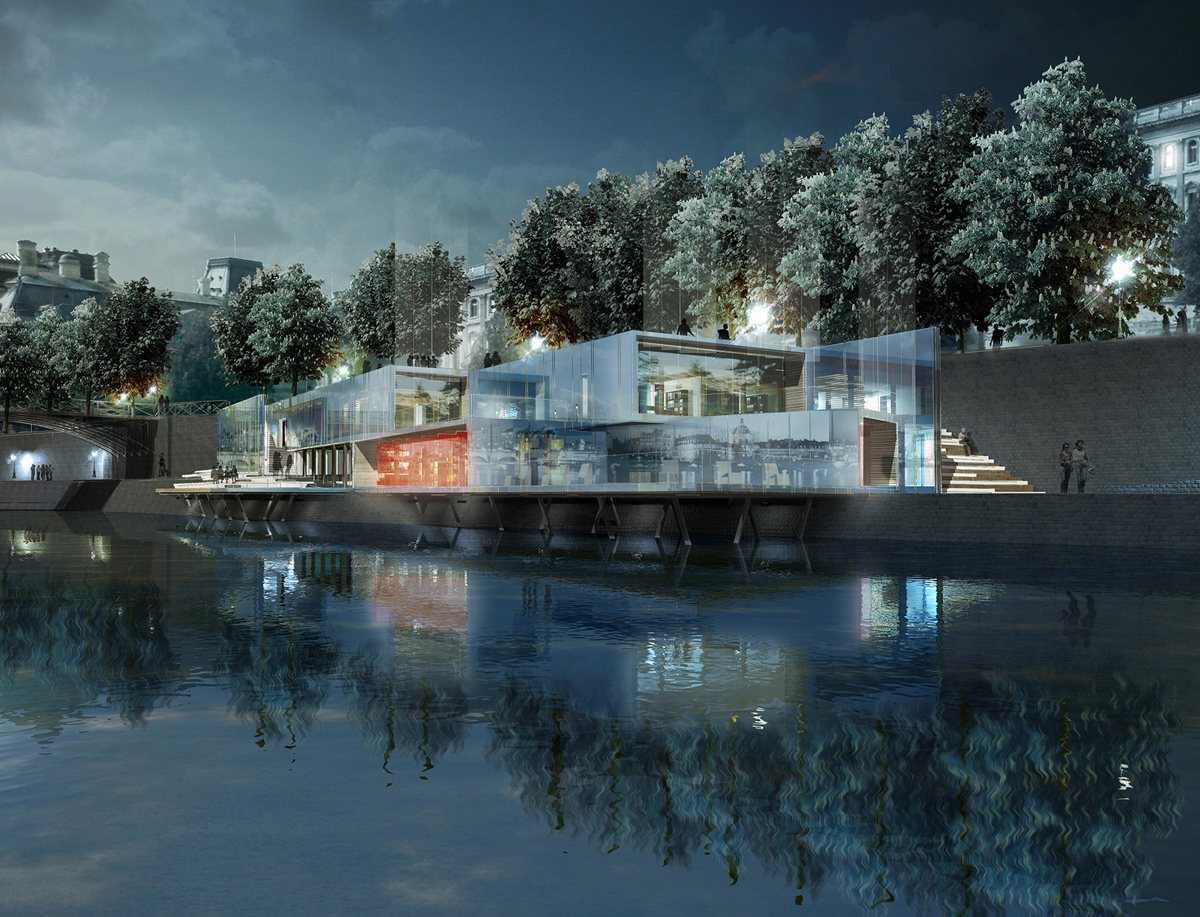 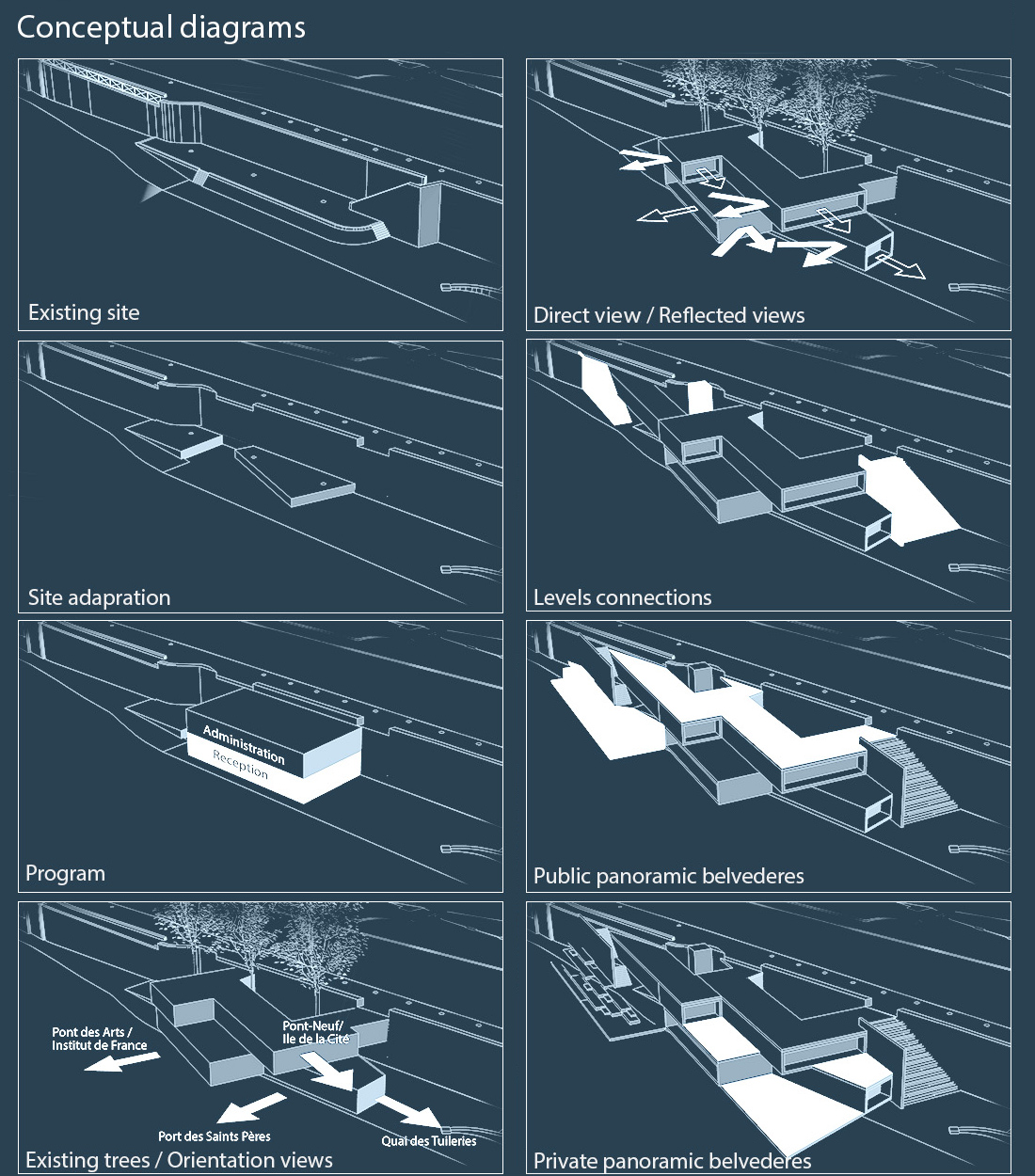 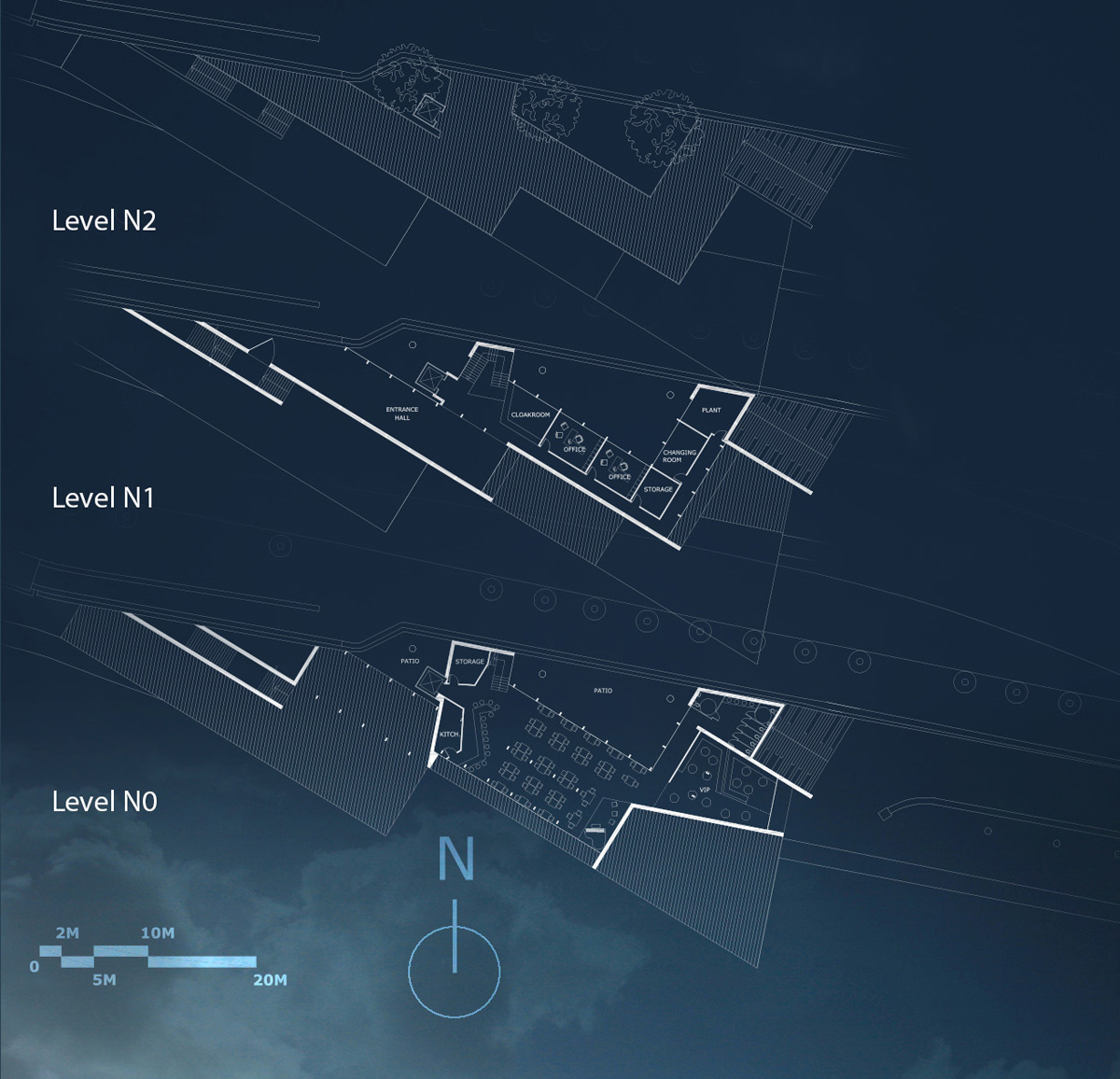 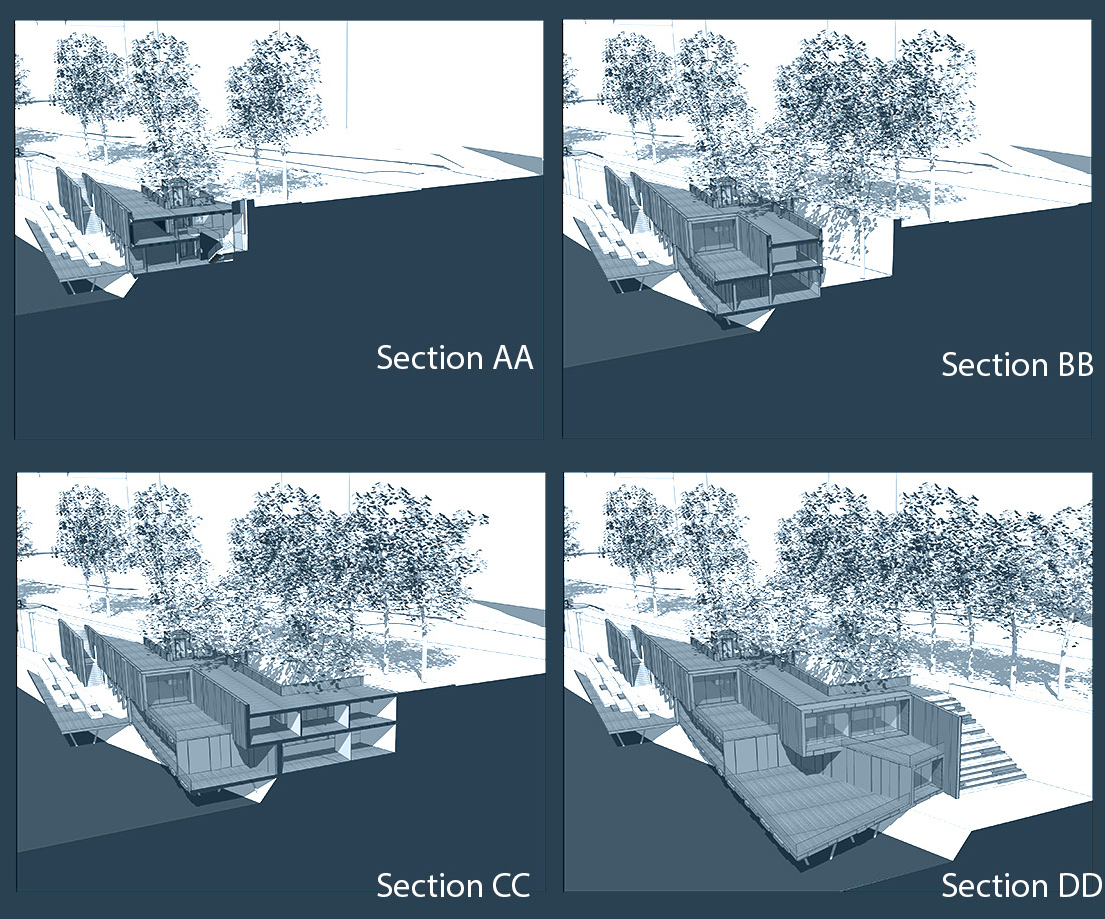 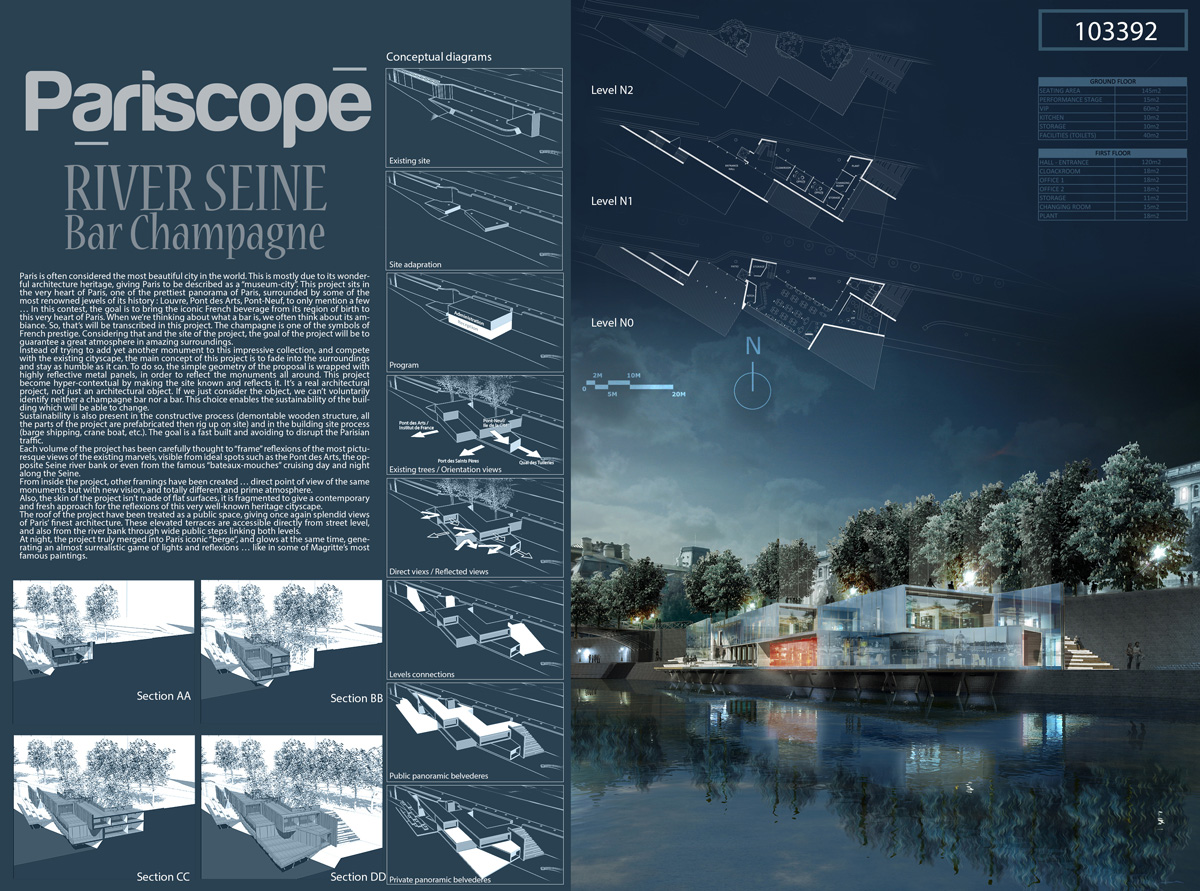 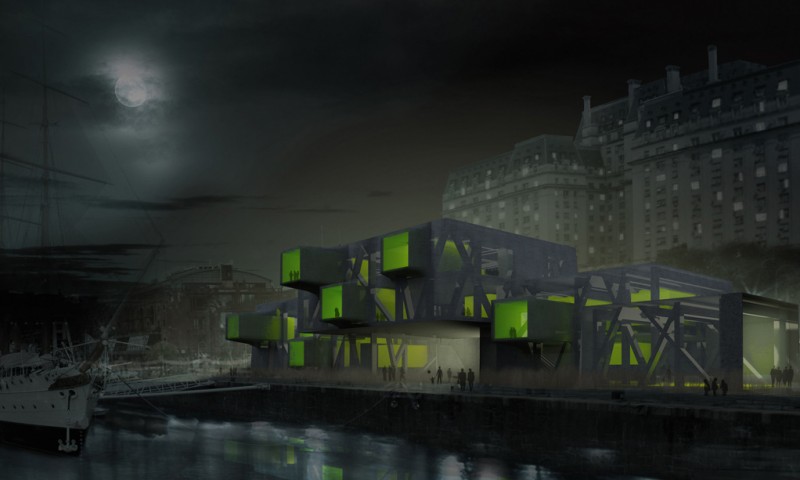 Buenos Aires, Argentina Museum 9 000m2 2012   This project suggest an approach at the junction between tangible medias and intangible medias, proposing a space enlightening the moment, the surprise, creating a sensitive and ephemeral experience. This museum design is following this idea by offering flexible spaces, transforming the building according to the exhibition taking […] 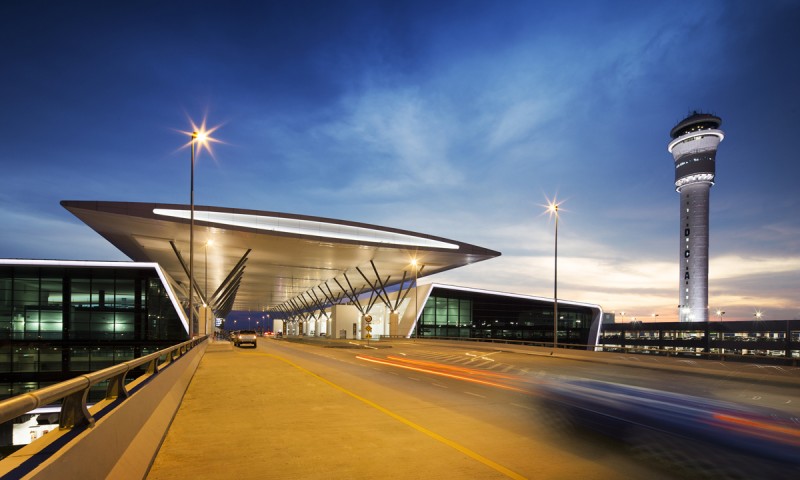 Kuala Lumpur, Malaysia Airport 100 000m2 2011   To satisfy the increasing demand in terms of Air traffic in South-East Asia, Malaysia, the home country of fast growing airline AirAsia, is opening a second international Airport in Kuala Lumpur : KLIA 2. The architectural answer to this extremely fast conducted project is a contemporary structure, […] 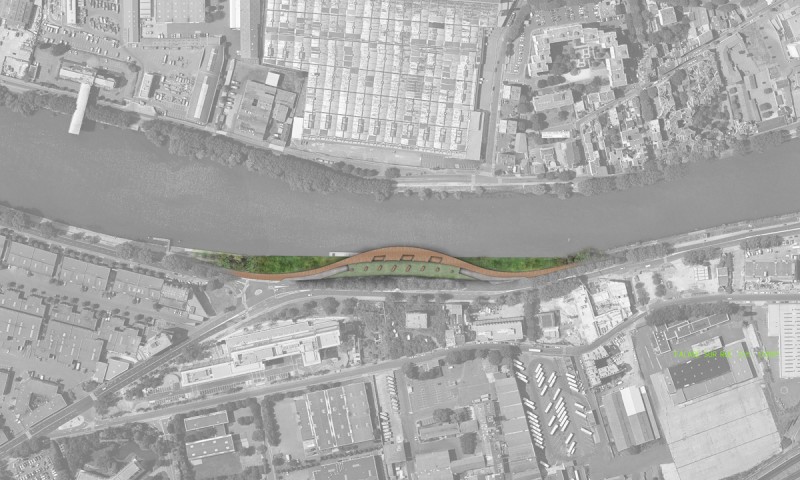 St Denis, France Industrial 5 000m2 2007   Since the last few years, the relationship between society and waste that it produces has dramatically evolved. From a linear way of thinking (product to waste), we are now moving to a cycling vision (product A to waste A to product B …). If this relationship changes, […] 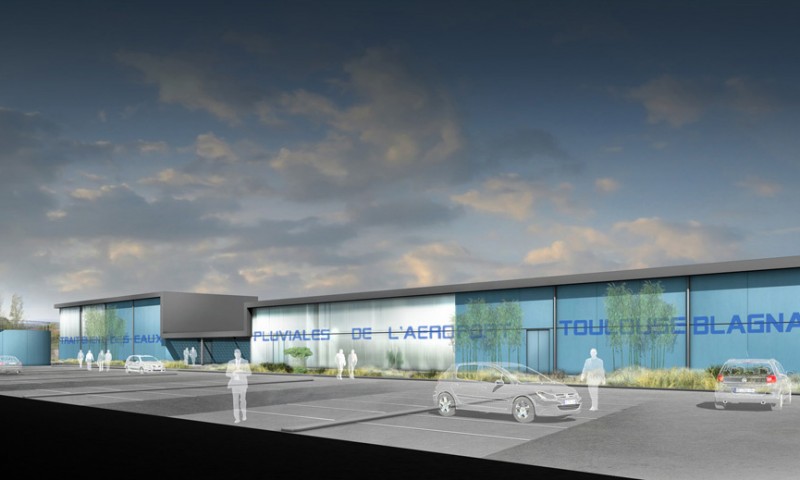 Toulouse, France Industrial 800m2 2007   Located at the edge of Toulouse-Blagnac Airport, this water treatment unit feeds two needs. On one hand, it collects and delays the overall airport rain water. On the other hand, it treats this same water to clean it from any hydrocarbon before let it go to a natural channel […]